Be sure to follow the new KS page here!

More content on Monday! Be sure to follow the new KS page here for launch notification and previews of the new campaign.

Frenemies features seven rivals competing to find a mysterious lost planet which used to dominate our solar system, the source of technology so powerful it looks like dark magic.

Where did it go, and what strange forces caused the disappearance? Why is this sinister magic essential to the future of humanity? More importantly, how does it transform our protagonists as they fall under its insidious spell? Only one of our heroes can reach the Lost Planet and inherit these alien powers, restoring balance to the solar system. Do they cooperate, or fuck each other up? Or can they do both? Is your best friend your worst enemy when so much is at stake?

Frenemies:The Lost Planet stars seven diverse characters drawn by Yishan Li (Image, Dark Horse) and written Monty Nero (Titan, Marvel). It evokes sci-fi greats like Alien, Star Wars, and Flash Gordon plus the cosmic thrill of comics like Supercats, We Only See Them When They’re Dead and Saga. Cunningly, it utilises Kickstarter as a storytelling platform with daily cliffhangers like the classic Universal/Republic serials, mixing the best of vintage and progressive sci-fi into a fresh new story.

You can get notified for the  kickstarter here and read new pages online (appearing Monday to Friday.) 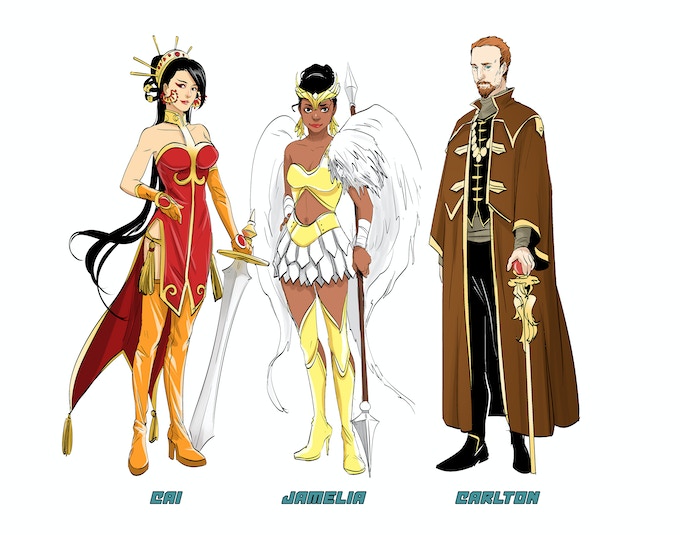 Cai is a mischievous sexual adventurer – with a dark secret. As a Phd student at Camford University she develops an obsessive interest in Professor Min Yeong. Charming and well-liked, she’s definitely up to something.

Delphine is a French philosopher and cosplay queen and therefore superior to all you British and American fools. She’s currently dating Sunny, who she loves like a favourite pet, and it determined to come out of this adventure the winner for the good of humanity.

Carlton Dunbar is an irascible Professor of Mathematics at Camford University, desperately searching for his young son. His single-mindedness brings him into conflict with the others, especially when they discover the real reason for their quest. But his motives seem good, despite their tragic consequences.

Hunter is a rich, bi, sporty, handsome, US entrepreneur whose motivations are as dark as his family history. No-one loves him more than he loves himself, but his two-fisted bravado and physical prowess make him worth putting up with. Most of the time. Underestimate him at your peril.

Jamelia Jackson’s a bisexual genius from Ireland who thinks she has the answer for everything. Her quixotic nature drives all her decisions, whatever the consequences — throwing her into conflict with those of a more practical persuasion. But her motives are pure, and she might just have the heart to succeed where others falter.

Sunny is the youngest character – a brilliant, shy, child prodigy questioning his whole identity. Half English, half South Korean, he doesn’t really know his father, and has a strained relationship with his mother Professor Min Yeong. He is the least confident member of the group, even though he has the sharpest mind. Sunny designed the scanner the Frenemies use to track down the aliens, though Hunter will tell you it was a joint effort. He’s also utterly in love with Delphine, who holds an unhealthy influence over his decisions.

Professor Min Yeong is a wildly eccentric English explorer,  lesbian, Professor of Art History, and trailblazing punk feminist. Rumours swirl that she moonlights as a paranormal investigator and tomb-raider, even while pursuing her glittering academic career. The difficult relationship she enjoys with her son Sunny is a source of  heartache. But she has by far the most experience of extra-normal phenomena, and seems to know a lot the others don’t, which begs the question — who’s really leading this group?